William Shatner does not suffer Ari Ne'eman and Neurodiversity gladly

The neurodiversity  movement and ASAN  spend a great deal of their time harassing people who support autism speaks in any way, claiming that a cure for autism is wrong and the organization they loathe so much is interested in eugenically eliminating autistic people.  This is despite the fact that Autism Speaks changed their mission statements cutting the words 'cure' and 'prevention' and 'global health crisis.


They go to autism speaks walks and harass parents who walk for this organization and try to tell them why they should not donate to the organization.  They particularly like to harass any high profile celebrity who might support autism speaks as they did to Jerry Seinfeld some years ago when he was set to perform for an autism speaks event.

A new target has recently entered their crosshairs.  William Shatner is a renowned actor who played Captain Kirk in the television series Star Trek in the sixties and played policeman TJ Hooker in the eighties.  He recently incurred the wrath of Ari Ne'eman and some other members of the neurodiversity movement when he had the chutzpah to post a light it up blue logo for autism awareness month on his twitter, account showing support for autism speaks.  However, Mr. Shatner appears to be a celebrity who does not suffer Ari Ne'eman and other members of the ND movement gladly.

After Shatner posted the icon one young woman had this to say:

@WilliamShatner And Autistic people have been opposing them for a decade. Shut the fuck up and listen to the people who actually have to deal with this shit
— Samantha Barnett (@ArchaeoNerd95) April 2, 2017

Another tweeter calling himself latino sci fi geek had these words of wisdom:

@WilliamShatner That #AutismSpeaks Puzzle symbol is kind of the autism equivalent of a nazi swastika to jews.But people aren't aware of that
— Latino Sci-Fi Geek (@latinoscifigeek) April 3, 2017


Another person calling herself protect sebastian wrote a tweet that I have not been able to access calling Shatner a "human shit stain" for daring to support autism speaks.  You can go to Shatner's twitter account where he has a screen shot of it to see

There was more tempered rhetoric from a few other neurodiversity proponents, and Shatner tried to answer them back stating that if they believed autism speaks was a hate group they should complain to the IRS.  He also said Latino Sci-Fi geeks analogy was offensive.  He reprimanded Ms. Barnett for her profanity stating he would not have a dialogue with "ms. potty mouth".

This prompted Ari Ne'eman to write the following dishonest tweet on the subject matter:

.@WilliamShatner is yelling at Autistic people for trying to educate him about Autism Speaks. Not a good look, Bill. https://t.co/Cv3NqwrYlu
— (((Ari Ne'eman))) (@aneeman) April 3, 2017


Understandably, Shatner was offended by Ne'eman's misrepresentation of the facts.  He only said he did not appreciate being bullied and sworn at and people comparing autism speaks to the holocaust against jews which is one of neurodiversity's old parlor tricks and blocked Ne'eman on twitter.

Ari Ne'eman did not seem to understand why Shatner would block him and used this as an excuse to claim Shatner was trying to avoid him and his message.  He had abusive comments hurled at him, so if anyone was metaphorically yelling it was neurodiversity hatemongers.

In fact, though Ne'eman falsely accused Shatner of yelling it is the neurodiversity proponents who justify metaphorically yelling to get their way:

Shatner went on to question what neurodiversity was doing and their tactics on twitter.  He also posed the interesting question of whether the autistic self advocacy network should have a 501(c) status based on something I'd never heard of called the 43-86 rule where apparently if a tax exempt organization exists largely to educate persons on a certain issue that they do it in a polite and honest manner.  Shatner posed the question of whether one charity should have as it's goal attacking another charity.  Though he did all this very calmly in spite of some nasty tweets, particularly the downright abusive ones that I've embedded on twitter, Ne'eman still claimed that Shatner was yelling at him and was somehow surprised when Shatner not only blocked him but refused to turn the other cheek.

Neurodiversity blogger Matt Carey, without having read the tweets, wrote a blog post justifying this abusive rhetoric to Shatner, stating it was done with the noble cause of protesting autism speaks.

Steve Silberman also got into the act, according to him the good guys are people who cuss people out who they disagree with, equate them to nazis and lie about the facts. 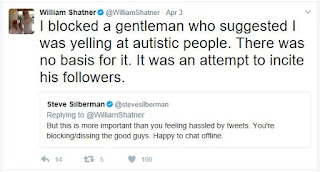 Complete misrepresentation of what actually happened but apparently they learn from the founder that if you misrepresent; you get sympathy.🙄 https://t.co/yRdqfAxdvL
— William Shatner (@WilliamShatner) April 4, 2017


Yes the former Star Trek actor nailed it.  Ne'eman misrepresents and because this ploy has worked for them in the past, it incites the other ND's to attack Shatner or anyone else who dares disagree with them.

I guess this is how Ne'eman and other ND's got Autism Speaks to change it's mission statement and got the federal government out of the combating autism business.  They've apparently managed to bully and intimidate a good number of people, but Shatner stuck up to them and blocked them and would not tolerate their abuse and Ne'eman's dishonest misrepresentation of the facts.

Mr. Shatner, I know it is highly unlikely you will read this, but in the improbable event that you do, I just want to say I'm an individual with autism and I want to thank you for having the gumption to stand up to neurodiversity and not suffer these fools gladly.

I think I am in love with William Shatner. My hero! ❤❤❤❤❤. Too bad my autistic children are too horrifically mentally disabled to defend the Captain and his wisdom.

Amen, he's my hero now too. I agree, in general it's too bad too many on the autism spectrum are too impaired to refute neurodiversity nonesense regardless of what mr. shatner said.

Not only did he read it, he posted it.

William Shatner: Hero to Deplorable Autists the world over.

I have 2 asd children. Always loved Shatner and totally respect his stand. These Twitter twats just irritate the heck out of me.

@Dave. yes I saw his tweet to me, glad he read it.

We are in such dark times that researching the cure to disability is being called misguided and research to "acceptance" and embracement is being endorsed why because we live in a society that is offended by the truth and by what's good, for example, my question the safety of vaccines that's offensive to autism and disabled people I also question the ethics and safety of psychoactive drugs it offends ADHD autism and other disabled people and I can go on and on and on with this insanity. It's like saying research into making our environment recover is misguided and instead they want us to be able to geoengineer the environment and they embrace this research, but not the other good research that can save our planet same kind of backwards mentality we are already eating GMO's and have a fake climate.