No, reader, your eyes are not deceiving you when you read the title of this blog post.  I spent a good portion of my day today with John Elder Robison.  Before you stop reading this post because you think I sold out to the neurodiversity movement along with Autism society of america, Autism Speaks, and the federal government, I assure you I'm still the same pro-cure, anti-neurodiversity guy I was yesterday before I met JER in person for the first time and have been for years.

Though I've had my differences with John in the past, he's always been cordial to me and has been willing to listen and let others with a viewpoint that does not agree with his tell their side of the story.  This is in contrast to other neurodiversity proponents who do everything they can to censor me and prevent my POV from becoming known.

John told me he'd be in los angeles at a presentation and invited me to come.  We'd known each other in cyberspace for years, but had never met in person.  I accepted his invite, and decided to put our differences aside.  We met and shook hands and he told me that he was interested in having me speak to people at the conference and show them the divergent viewpoints of those of us on the spectrum.

I was a bit concerned that Alex Plank might show up and there might be some problems, but I'll write about this a bit later.

I listened to him lecture in the auditorium and was a bit surprised when he said he knew autistic people who lived in the los angeles area and mentioned me by name and pointed to me.  I raised my hand and some of the audience clapped and he spoke about how much I hated my autism and wanted a cure.

Shortly afterwards, Mr. Plank did show up and JER pointed him to the audience to.  Then, to my surprise, he invited Alex and myself to join him on stage.  The audience asked us some questions and the narcissist in me enjoyed getting some attention.

We spoke of the problems of employment of autistics and I stated there was no simple solution, except for teaching an autistic a marketable skill and having them work at home if they could, such as what I did during my last nine years or so of being employed when I did medical transcription at home.

Alex Plank commented that since he was self-employed, he didn't have to worry about being fired.  I was curious how Alex supported himself.  Someone in the audience shared my curiosity. and asked him about this. Plank stated that he made money from advertising revenue on WrongPlanet.

After the presentation, JER spent some time signing his books for people who went to the conference and he and I chatted a bit.  I was hesitant to talk to Alex, but he made a few comments to me and I spoke with him.

JER asked me about my online friendship with Manuel Casanova and we discussed that a bit, but not in great detail.

I then brought up Roger Kulp's name telling him how much I wanted Roger to have a more visible position in the autism world and wished that he could have been on Autism Speaks' Board.  John said he believed at some point Roger would be appointed to something, but I was rather skeptical about that, and told him Roger had basically told me he accepted the fact the federal government and Autism Speaks were not interested in hearing his pearls of wisdom and he'd moved on.  I said that I wished Roger could have been there with us.  Robison said that if and when he's in Roger's hometown he'd be interested in contacting Roger and getting together with him.

Robison also asked me about my online friend Yuval Levental and I told him what I thought Yuval was doing now.  Yuval has been a very devoted fan and sort of my self-appointed publicist and I've appreciated the fact that Yuval would spend the time he has trying to help me get out the word about my novel "The Mu Rhythm Bluff" and my perspectives about autism.

Without going into all the details of our chat, John Robison stated that he didn't believe that I should fight with neurodiversity proponents and that I should try to work with them on a common goal.  I explained to him that I did not want to work with people who were abusive to me and insulted my parents.

This is when my interactions with Alex Plank became a bit more interesting.  Alex pointed out that he was an ND guy but had never insulted me.  I then pointed out that he'd banned me from his website, which seemed to surprise JER, who said "really?" and looked to Plank was was nonplussed.  I also said that I'd constantly experienced rude behavior from some of WP's denizens, being called a minimally educated sociopath and such.  Plank pointed out to me that with thousands of members he could not control their behavior.  I replied that I judged people by the company they kept.

Alex went on to apparently extricate himself from William Freund and Hans Peterson, two wrongplanet members who went out and murdered people, explaining that just because out of many members a couple of them turned out to be murderers, this was no different than the general population.  I disagreed with this, believing the percentage of killers on WP exceeds that in the general population, but did not want to be antagonistic, so I said nothing.  Then Alex added that did not make him a murderer.  I responded that though I'd had many disagreements with him, he was certainly not a murderer.  In spite of the strong differences Plank and I have had (even moreso than with JER) we managed to stay cordial to each other, so my worrying about a bad confrontational situation with Plank proved to be for naught.

Before we called it a day, I asked Robison if he had any proof that the Georg Frankl that Kanner had worked had also worked with Asperger. I'd looked at Steve Silberman's bibliography and other references and I could not find that proof.  Robison pointed out to me the article he'd written about the subject which I read but don't recall him ever providing that, so I said I'd read it again.  There is supposed to be a transcript of when Frankl applied for a position in North Carolina and I said that I'd look into it.

Well, I hope no one thinks I'm a sellout for spending time with Robison.  I had no ulterior motive if anyone wants to think that.  A good day seemed to be had by all and again I'm glad I got along okay with Plank.
Posted by jonathan at 3:13 PM 8 comments:

I just wanted to let my readers know that I encountered a facebook group autism acceptance (or something like that) who had a post asking why any autism group would promote a shirt advocating for a cure for autism and ergo the destruction and killing of autistic people.  It was captioned with the following photo: 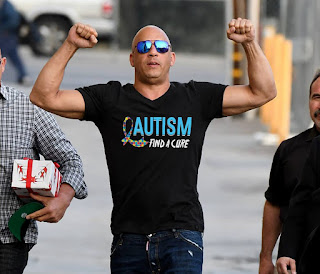 This is a photo of actor Vin Diesel wearing a shirt advocating for a cure for autism .  This generated a flurry of angry comments protesting a cure and claiming those wanted a cure wished to destroy autistic people.  Some people alleged that this was photoshopped and Mr. Diesel never actually wore this shirt, i don't know if that is true or not.

I made the mistake of posting a comment on this page stating that though a cure may be considered politically incorrect, it was a nice thought and that if people did not want a cure for autism they should not get one.

I then copied and pasted this photo on my own facebook page with a similar comment.  I was shocked to find that at least one of these neurodiversity people reported this to facebook and had my post deleted.

I was so shocked and angry over this injustice that I posted that I was seriously considering deleting my account.  One individual commented that some neurodiversity people had started a page entitled "Mothers who hate their autistic children" which was apparently one of the well-known attempts by some neurodiversity activists to bring back the bettelheim era.  They would say things like some mothers wanted to cure their autistic children because they hate them.  They filed a report with Facebook who responded that this did not rise to their definition of hate speech and did not delete the page.  But apparently if someone posts a polite comment and photo like this, this constitutes hate speech from Facebook's point of view.

I wrote a post stating that I was considering deleting my account I was so angry over this, though some people urged me to stay on.  I requested an account delete but it usually takes two weeks or more to go through and you can cancel before deleting your account.  I decided there might be an alternative explanation for this like a DMCA violation of posting this photo, so I cancelled the delete and told people I would stay for the time being.

I thought this originally because the photo was taken out of the original post I got it from, but I just think the page owner found it so offensive she coudldn't stand looking at it.  So, it seems unlikely there is an explanation other than the fact facebook engages in censorship of anti-neurodiversity pro-cure posts even if they are polite.

I've now decided on a compromise.  Instead of deleting my facebook account I deactivated it, meaning that I put it in abeyance for an indefinite period of time but I can always go back and put it back on if I want.  So this way, I won't lose data if I want to go back in and get some old photos or some other data I have on my FB page.  I can also restore the page if I change my mind.

There is no point in participating in facebook if they are a pro neurodiversity organization who engages in this type of censorship.  Now the ND's have succeeded in getting autism speaks to abandon the search for a cure and the federal government to abandon combating autism, they've now suceeded in getting facebook to delete any pro-cure posts that they report to them.  At least they were not successful in getting my newsweek profile killed.

So I guess if anyone gives a shit about me they can see what I post on twitter, which does not seem to engage in the petty censorship that facebook does.

I enjoyed logging on to facebook and looking at some people's pages and chatting with people and all the other perks involved in being on facebook.  I guess the ND's can take some satisfaction in that they've delivered another blow to me and unfettered speech.