William Stillman is an individual alleging to be on the autism spectrum who some years ago wrote a variety of books about autism, parenting, and a controversial book, Autism and the God Connection where he apparently alleges the huge increases in prevalence of autism in recent years is some sort of divine plan. (I have not read this book)  For some years, Mr. Stillman had remained dormant and I had not really heard anything about or by him in a while.  He recently wrote a piece for the Huffington Post giving his most recent take on the Autism Epidemic.  Old time readers of autism's gadfly will remember a post I wrote more than five years ago where Mr. Stillman stated that autism was a new stage in human evolution.  He predicted that the prevalence of autism would increase to 1 in 10 individuals within a five to ten year period.  He made this prediction nearly six years ago.  I stated in the post that I would write blog posts during the time frames of his predictions.  I suppose I should have written about this last year in 2013.  In the better late than never department, I'm writing about it now.  The highest figures for autism prevalence given lately are 1 in 88.  There is also a 1 in 50 prevalence number that is dropped sometimes which was just the result of a phone survey and used a very different technique from that used to get the 1 in 88 number.  In fact, the trend seems to be going in the opposite direction of Stillman's prophecy.  Recent news stories are stating that autism diagnoses will likely drop 30% because of changes in the DSM and APA guidelines.

I realize that Bill Stillman did not state a flat 5 year time frame, but did give a 5 to ten year time frame in his prediction.  CDC studies (excluding the one 1 in 50 study) have shown that autism diagnoses have gone up somewhat in the past five years, but not at the same rate that Stillman predicted.  I don't know if there will be new prevalence numbers in the next couple of years after new APA guidelines and the new DSM have been around long enough to be relevant.  I'll await to see what they are.  I guess I'll have to try to remember to write a new post toward the end of 2018 commenting on whether or not Stillman's prediction came true.
Posted by jonathan at 9:04 AM 1 comment:

Regular readers of autism's gadfly will remember last year I wrote a post about an individual who wrote a post threatening to kill people and posted it on the well-known neurodiversity website wrong planet.  It was quite an angry rant.  Shortly afterward, in a subsequent post, the individual posted that the whole thing was a joke.   Maybe it was a joke, but there are certain jokes that are in poor taste.  Taking into consideration the recent shootings of Adam Lanza in Newgate, the controversy as to whether or not Lanza was on the autism spectrum, and the fact that in a previous incident, Wrong Planet had neglected to report a similar threat to authorities which resulted in two innocent people being murdered I decided to take action and report this individual to the FBI.  I was not sure what the results of this action were, but tonight I've found out about some posts this individual made regarding what happened over a year ago. 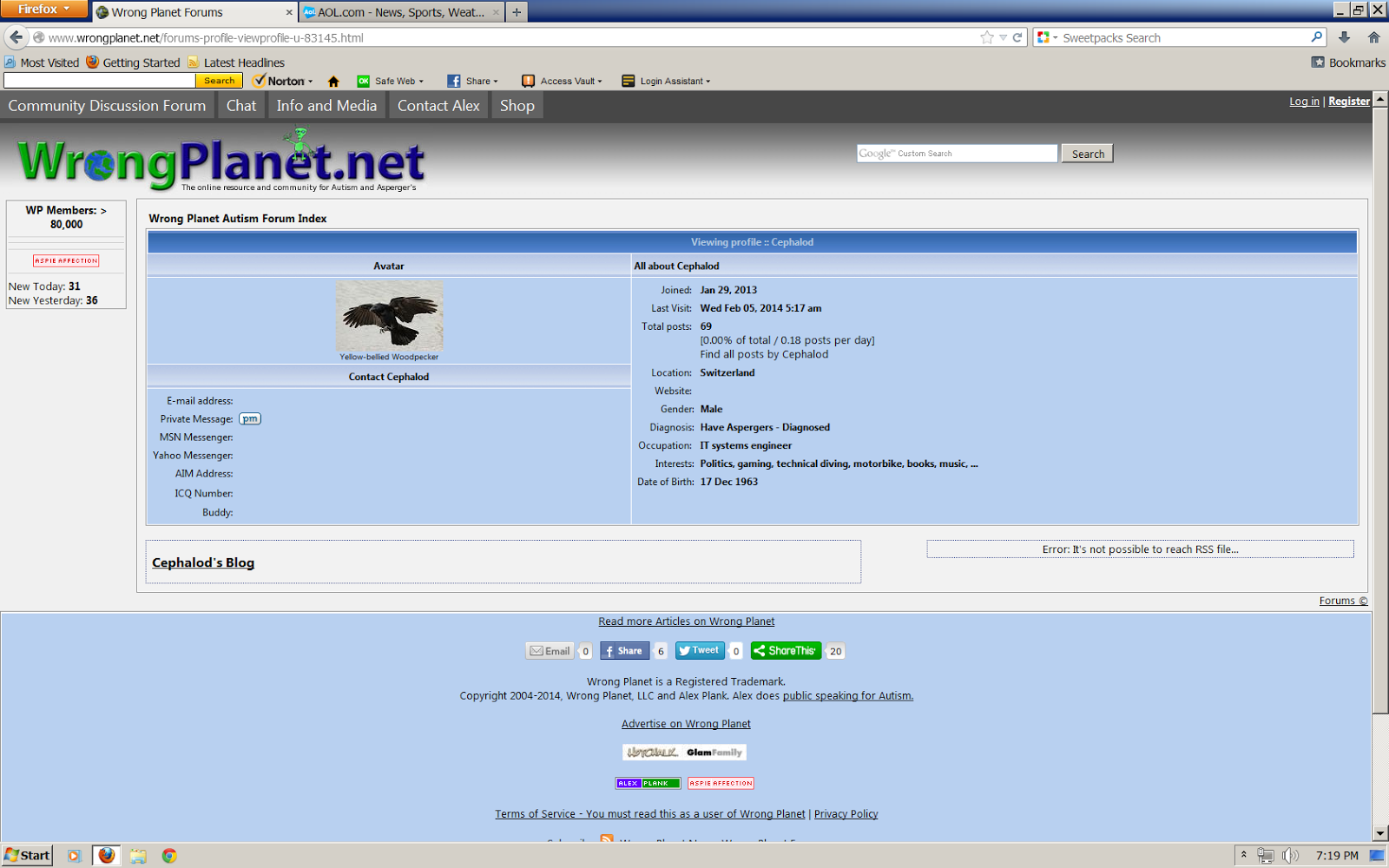 As can be seen from the screenshot above, this individual is still a member on wrong planet in good standing who logged in today. I have to wonder why someone who threatens to kill people on a website that has been sued for being responsible for the murder of two people is still allowed on this web site when I was banned for using a handle they did not approve of and posting some anti-neurodiversity ideas. .

On doing further research, I discovered a thread in which this individual posted where at first he doesn't seem to understand the consequences of his actions but then concedes what he did was stupid but still seems to think anyone who would report him to authorities is overreacting.  The thread can be viewed here. He starts: In the first lines of my rant I stated that is a pure rant.. He does not seem to get it. He seems confused as to whether a threat is not a threat because it has been classified as a rant in some forum called "haven" on wrong planet, where people are free to vent however they please including threats to murder people. He goes on to say:  My question here: if a rant in The Haven has these consequences, even making it more than clear that this is a pure rant, how can I trust this community anymore? * It was a rant, in the first place. As per my understanding, a rant is NOT required to be a well thought through, but maybe I'm wrong here? Yeah, I'd say you're wrong, but maybe that's just my opinion. Though the individual in question, apparently resides in Switzerland the FBI apparently tracked him down and reported him to the local authorities. He states that though they did not take his "rant" seriously, the case was referred to the local prosecutor's office which seems odd. Also, apparently this individual really did have a gun:
FYI: the authorities here didn't even ask me to turn over my gun to them (yet), they only asked me if I would if they'd ask me. Told them I would ofc, if only to be back living in peace myself w/o any more "official" hassle. But now, this whole incident, originating from an overworried citizen in the US, is going the official way, next station: public prosecutor's office.

I don't believe I was overworried and I did the right thing reporting this to the FBI.  I had no idea whether the first post where he said he would shoot people was a joke or if his followup post saying he really wouldn't shoot people was covering his tracks.  Anyone who would post this for trivial matters has some serious mental problems and I wonder what sort of country Switzerland (or any other nation, state or municipality for that matter)is that would allow someone with problems like this to own a gun.  It is a shame that the authorities did not demand he surrender his firearm.

Another Wrongplanet denizen calling themselves Aspergersanswers does not seem to have a very high personal opinion of your humble blogger:

What as*hole idiot called that in.

Its beyond belief what I have just read

how can I trust this community anymore? - You cant. Too many spiteful idiots who try to bring you down to their non-functioning level.

I know this because my trust was soon destroyed here by ONE hate filled cretin. I've not trusted the place since.


The individual in question complains that he won't be able to travel by plane anymore or visit friends in the U.S.A. anymore.  He seems to blame me (or anyone else who notified the authorities for that matter) on his trivial misfortune.  He also claims he might be subject to a lawsuit.  I really feel no remorse about this.  Certainly if he lived in this country  the TSA would have reason to regard him as a threat and not allow him on an airplane.

Aspergersanswers had more words of wisdom on the subject:

This is a disgrace.

WP - or its unvetted trolls are screwing people over.

This is by far the most ignorant spite filled hate based forum I've ever seen.

I'm pretty angry about this. Its the opposite of what people need. Even NT people know better than this.

In all fairness to Cephalod, the individual in question, he does give a more reasoned response in his last post in the thread which largely contradicts his previous posts on the subject:

I would like to add some final thoughts here.

1. Ultimately, it was me who made some very stupid mistakes in posting that angry rant. Posting an angry rant is one thing, but making such threats I did was just plain right stupid. Even more stupid and naive was not even to think about how others could perceive it. At least I posted only a few minutes later my "all clear, at ease".

2. If someone got scared and informed the autorities, that is only an understandable reaction. Imagine, you'd have lost a family member or a neighbor in one of those horrible events that happened again and again during the last years. Who wouldn't be scared then?

3. Yes, I wish that person would have acted more thoughtful instead of overreacting. Didn't happen. It's unfortunate, bur nothing I can do about it.

4. And the authorities were absolut right to take action. Better ten times false alert than beeing too careless once. If I were a law encorcement officer, I couldn't live with the idea that if only I had acted, I could have saved lives.

5. Yuugiri, you were right about trust. Someone did inform the autorities and as I said, I really can't blame that person. So this is not a trust issue in the end.

As I said, I made a couple of really stupid mistakes here and I am very sorry about it. I will definitly never make such mistakes again. And if there will be consequences for me, I'll have to accept them and pay the price for beeing too stupid and naive in the first place.

I wish I'd known about Cephalod's follow-up posts sooner and had blogged about them last year as soon as they became available.  Unfortunately, this is the soonest I knew about it and my apologies to the blogosphere about that.

As far as I know, Cephalod did not actually go out and kill anyone and does not pose any threat.  I suppose some people will argue this happened a year ago and is old news.  However, I feel this problem goes far beyond one wingnut who publicly posts on a website that he's going to kill people. and other posters on this website with a bizarre ideology that they actually use some sort of semantic sophistry to claim there's a difference between a "rant" and a "threat".  As far as I know, Autism Speaks still provides funding for autism talk TV.  Alex Plank has been a keynote speaker at an Autism Society of America conference.  There is a TV show that uses him as a consultant on scripts.  Let alone people who purchase advertising on Wrong Planet.  Why is it that people would support people like this, who think like this, who run a website like this?

Maybe these are dumb questions, but what in the hell is the autism world coming to?  Why is it that people throw all common sense out the window?