Over the past six or seven years, since Steve Silberman's successful article in wired magazine and his announcement that he intended to write a book about autism I've had occasion to write some blog posts about the Wired magazine journalist and I've had some interactions with him.  None of them were acrimonious until Steve blocked me on twitter for stating that he and Thomas Armstrong had never been to a special ed school as I had so they did not understand what it was like to be a special education student when he was plugging Dr. Armstrong's book on neurodiversity and special education.

Mr. Silberman has made many statements over the years that I have found terribly offensive.  This includes his use of a favorite neurodiversity parlor trick of comparing autism to homosexuality, stating that autistics have trouble in the workplace because human resource offices don't know how to accommodate person's who can't speak and use keyboards, his comparison of autism versus a non-handicapped person to a windows computer operating system versus a linux or macintosh, and his statement about autistics who are incontinent and engage in self-injury that disability is part of the human experience and we all become diaper wearers eventually.  I could not possibly imagine that Steve could top himself and hit another all time low, but it appears he has.

Before I explain, I'll tell a bit of backstory on this post first.  Steve Silberman and I now have a mutual friend on facebook.  There is a young man on the autism spectrum named Tom Clements who calls himself "the autistic buddha" and has written a book about his experiences with autism and buddhism that will soon be published.  He and I followed each other on twitter.  Though he has somewhat of a neurodiversity perspective on things, we exchanged some friendly tweets and then he friended me on facebook.  I started writing some comments on threads of his.

In the previous post I wrote about the nasty tweets William Shatner recently received, including one in which a certain individual compared the puzzle piece that various autism organizations such as autism speaks, the autism society of America and the NAS in England have used to a nazi swastika.  Tom responded that he found this offensive and I agreed and explained that comparisons between autism speaks and others who wanted to cure autism to nazis were nothing new.  Steve Silberman weighed in in this Facebook post: 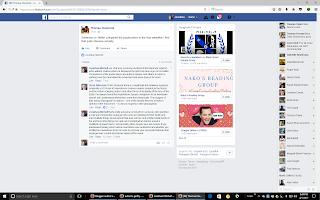 You can also see my response below to Silberman.  Though Silberman stated that he thought the comparison between autism speaks and nazis was "overblown" I still find what he wrote offensive.  I thought he'd hit an all time low in his statements about the "head bangers and diaper wearers" but it seems this time Silberman has outdone himself.  If I described what he said someone might accuse me of exaggerating or lying.  There is the old dictum in writing 'show don't tell'.  Well I will let anyone who reads this blog post judge for himself based on the screenshot I've provided showing Silberman's comment on FB.  Whether Silberman said or did anything wrong or if this facebook post is inappropriate, but I believe he was justifying the analogy between autism speaks and nazis and by extension anyone else, such as myself, who desires a cure for autism since in the past Autism speaks wanted to cure autism and some in neurodiversity have equated a cure for autism to eugenics.  Silberman seems to think we're a bunch of eugenicists who were inspired by the early history of eugenics in the united states in which people of color or handicapped people were murdered and who the nazis then used during world war II.

As in my response, I found this amusing or at least strange that someone who glorified Hans Asperger, which evidence suggests may have been a nazi war criminal who sent an innocent handicapped girl to her death and who vilified Leo Kanner who saved a multitude of Jewish lives during the holocaust would write something like this on facebook.  I'm still curious if Silberman interviewed Herwig Czech who brought these allegations about Asperger to attention and whom John Donvan and Caren Zucker wrote about in their book "In a Different Key"after "Neurotribes" was published.  I seem to remember that Silberman stated that he had tried to interview Czech but he would not given him access to the info about Asperger.  I'm still curious why Donvan and Zucker were able to get this information and he wasn't.  I guess it will remain a mystery.

Again, if someone thinks I'm overreacting to what Silberman said, I guess they can judge for themselves and read the exchange Tom, Silberman, and I had on facebook.
Posted by jonathan at 6:29 PM

Just say, I'm an autistic who wants to find treatments and doesn't need no stinkin' neurodiversity

When people tell me they subscribe to society, making them disabled not them being disabled and not being able to operate or function in society (people who peddle the idea of autism acceptance) I tell them "would you rather make society stupid and bring everyone down to your level like a looser or make you smarter and bring you up to our level like a winner" and they just continue to try to argue with me calling me names and trying to confuse me and silence me.
Organizations like the ASAN one of many that exist remind me of the people who cover up the problem as a solution making the problem far worse in the long run.

The name of the game for this comment or link is the comments and how I respond to them I think I did an ok job at my replying B- maybe (https://youtu.be/9UgLnWJFGHQ)

I am audio booking that Steve Shitberman book right now and as a person with real autism I dislike him and his down playing about autism severity. Silberman came to UC Davis MIND a few months ago and I asked him about you, all he said was that you hate him and bash his books no other comment about you by Silberman.

@seeing clearly You might be interested in reading the short story "harrison Bergman" by Kurt Vonnegut, you can find it online. It actually discusses the concept that you brought up, where people are brought down to a lower level if they are too superior.

@Will, I don't know if I would go so far to say I hate Silberman, but I have the upmost contempt for him. I think I've provided enough documentation in this blog over the last six years in posts about him that I can hope you or anyone else would understand why. And this last incident really tops them all in my opinion.

I have bashed his book Neurotribes (not any others if he has written others) Because though his writing is readable, I felt it was a poorly constructed book. You can read my one star interview on amazon and my elaboration of it. After you finish his book, maybe you can understand why, though I know others disagree with me. His response to you is indeed predictable, but he's probably not going to say anything else about me to someone else, regardless of how low his opinion of me may be.