Gadfly published in spectator, a few NDs, including Silberman, mock his disability

In the I've got some good news and bad news to report department, I have, first, some of the best news I've had in a while. I've been published in Spectator Magazine in the UK.  I wrote a short piece discussing the problems with the neurodiversity movement that I've linked to.  This is a prestigious magazine and will hopefully help get the word out about some of the problems with the ND movement.  It took them six months, but they finally published it.

Along with good news, there is also some bad news to report.  My article did not sit well with some of the NDs as can be expected.  Some of them have claimed that everything I wrote about ND was wrong and that my article was poorly researched.  A few of them have stooped to apparently ridiculing my disability as demonstrated in the following screen shot taken from twitter: 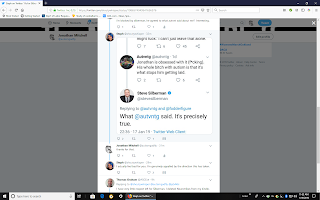 It started with a vague comment I don't understand that neurodiversity proponent Sarah Kurchak made about my article which is not included in the screenshot:


I know I'm supposed to ignore these types, but come on. Someone got paid to basically write "the neurodiversity movement has too many women in it... and also I have suspicions that they might fuck." I can't just leave that alone.

An individual who calls himself autvntg joined in the fun and stated that I have an obsession about fucking and my only bitch about autism was that it was stopping me from being laid.

Even more interesting, famed journalist and best selling author of neurotribes Steve Silberman apparently wrote on twitter that autvntg was absolutely right.  Such cruelty among neurodiversity proponents is nothing new.  I did not think Silberman could go any lower than he did when he justified the analogy between autism speaks and nazis and eugenics but I suppose nothing about this man should surprise me anymore.

Since Silberman has blocked me on Twitter, I was not aware that he had even responded to Autvng's comment in this matter, until one of my followers brought this to my attention and showed me this screenshot.  Since Silberman blocked me, I was not able to embed the actual tweet but only this screenshot.  I don't think I can go into Silberman's account and verify that this is real, but I think it's unlikely it's a forgery.

Autvntg and Silberman have apparently not spent much time reading my blog where I talk about my fine motor coordination problems, inability to hold down a job, inability to get things done during the day and stop twiddling (self-stimulation) and the variety of other issues I've written about that have affected me besides celibacy which I do blame on autism.

As some who have followed me over the years know, on occasion, I've responded in an angry fashion when various members of the ND movement cussed at me, insulted my parents and ridiculed my disability. I regret that now and hope from now on I can have a "just the facts ma'am" way of doing things and just report it on this blog or social media, rather than responding in a nasty way. It's not fun to see cruel comments written about me just because I hate this disability and wish there were legitimate treatments and a cure. However, I can take solace in the fact that if I elicited this type of response from Saint Silberman, I must be making an impact.

Steve Silberman is of course gay, so all he needs is a Grindr app.

He's already married to another man.

That's how they met.

Good piece you wrote for the Spectator. Just found your blog here after giving up on the Reddit autism forums,where I rarely find the other women there experiencing the same level of problems as I do, and I see myself as rather mildly affected by ASD. I won't go into details, but it's nice to find another human who gets that ASD is actually not simply a superior neurotype. I'd love to get rid of the ASD, it's not like it would change who I am.
My point of commenting is just to say thanks for saying what you want rather than just go along with the mob. It's a great thing to find this blog in the mood I am in today and I will probably spend too much time reading the archives.

He used to work for the late poet Allen Ginsburg. Ginsburg was a member of NAMBLA, a pedophile advocacy group.

Good article in the spectator.

Absolutely support your hard work. People need to speak out against ND. It’s the perfect trap, before you know it if autism supposedly isn’t a problem, the public opinion will eventually claim they can go get a job and pay rent like everyone else and get any disability welfare / other help stopped.

There`s a fine line between raising spirits among those with a disability by claiming “they can do anything”, to recognising they also have a medical issue that should be researched and ultimately cured.