Approximately eleven years ago.  Autistic conference speaker Tom Mckean created a hornet's nest when he wrote a letter to autism conference organizers stating that he believed that autistic presenters at conferences should release paperwork to speak to prove they're not self-diagnosed.  This generated the ire of neurodiversity proponents who felt McKean was singling them out.

Recently history has repeated itself when comments Jill Escher made to the IACC were read, suggesting that her severely autistic children's problems were not the same as those of extremely high functioning individuals.  This prompted autistic public members of the IACC to suggest they had similarities to Ms. Escher's children as well as other individuals gravely impacted with autism, yet one individual did not want to seem to go into what their challenges were

Though I disagree with Mckean that private individuals presenting at conferences paid for by private funds should be expected to turn over diagnostic paperwork or letters from doctors, I believed that autistic people appointed to government posts who make policy recommendations on how Taxpayer dollars are allocated to autism research and funding are a different case.

I expressed this thought on twitter, suggesting that public members of the IACC who are appointed because they are autistic provide the government with paperwork showing a diagnosis or even possibly make the record public someplace.  This ignited an internet war where I was bombarded with critical and even angry responses from a variety of people.  Some of them pointed out that if I were saying this should be done that I,  as an allegedly autistic person, should do the same and release my own paperwork to the general public.

Though I was not diagnosed in early childhood as people did not know much about autism in those days, I was diagnosed later in early adolescence by my psychiatrist at the time Richard Casady.  Some years later, in 1977, Dr. James Simmons also diagnosed me.  To the best of my knowledge, no paperwork is available from either of these doctors.

I don't have the first of Dr. Sapin's letters handy, so I published the one in a blog post he wrote in '04.  I was kinda traumatized and stressed by the internet flame war and controversy that my suggestion initiated.  Also, the statement had my medical record number and my mother's as well as other info I was not sure I wanted on the internet so I deleted the post as well as two others that were critical of one allegeldy autistic public member of the IACC.

However, I recalled I also had paperwork from the Courchesne lab and an evaluation I underwent with Dr. Alan Lincoln that they wrote to use in my disability case of some years ago.  Here is the paperwork.  The first paper has my social security number on it which I crossed out for obvious reasons.  The interested person can see that this is confirmation that my autism was confirmed according to ADOS criteria.  At some point, when I can figure out the best way to do it and get Dr. Sapin's earlier letter, I might upload that as well in this or another blog post. I realize this may not satisfy my numerous detractors in the neurodiversity movement, but here is some paperwork on my autism evaluation which I hope will provide some accountability of myself as a genuine autistic person who is not self dxed. 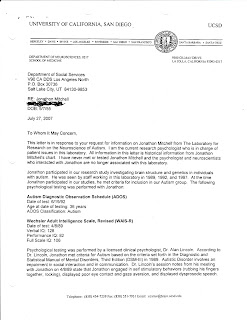 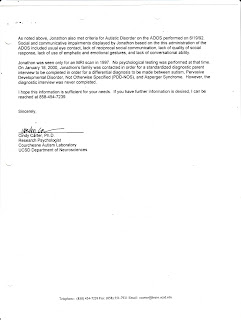