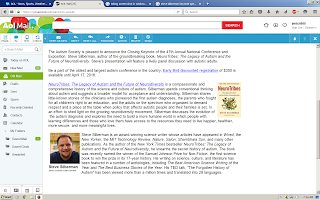 The Autism Society of America is the oldest autism organization in the United States.  They go back to 1965 when Bernard Rimland and Ruth Christ Sullivan decided that an advocacy organization was needed.

I joined up with them in the early nineties, well before neurodiversity was invented or before almost anyone in the united states had even heard of Hans Asperger and there was such as thing as "Asperger's Syndrome".  I went to one of their picnics and a couple of their board meetings that were open to the general public.  I spoke on a panel in the very early nineties right around the time operation desert storm started in Iraq.  There was a good thing about being involved in this organization and being able to go to some autism related meetings.  I met my friend Jerry Newport shortly after that, after he'd seen Rainman and decided he was similar to a real life Raymond Babbit with his mathematical savant skills.  In those days, autism organizations were dominated by parents and Jerry and I would be the only ones on the spectrum who attended the meetings.  This made me feel a bit awkward, but the parents were always interested in my perspective.

Not long after this, Jerry, some other people, and myself formed AGUA (Adult Gathering United Autistic) in 1993, an organization for autistic people to meet monthly and socialize--probably the first group of its kind ever.  This organization would provide the inspiration for the group RASCAL in my novel, the Mu Rhythm Bluff.  More significantly, the group provided the inspiration for the movie Mozart and the Whale.  I went to some of ASA's conferences and met some nice people and had a few good times there.  I would read their newsletter, The Advocate, when it came out.  So to this day, I have some nice memories of ASA.

Another good thing about ASA was they included autistic voices in their perspectives.  Temple Grandin served on the board of directors.  She was followed by old school advocate Tom Mckean who disagreed with neurodiversity and favored a cure for autism.  Some years later, when Stephen Shore arrived on the scene and began his ascent as conference mega superstar, he became a board member also.  This made them immune to neurodiversity's hate mongering complaint that they've repeatedly leveled against autism speaks about there being no autistic board members prior to Robison's appointment to their science committee and Steve Shore and Valerie Paradiz's appointment to the board of directors.

As neurodiversity's tentacles and influence began to get a footing in the autism world, all that would begin to change.  Red flags waved as the Autism Society of America endorsed Ari Ne'eman's appointment to the National Council on Disabilities, despite protests from The Age of Autism folks, Jon Shestack, and others like myself who loathed neurodiversity.

Next they had Alex Plank as a keynote speaker at their annual conference.  This is an individual who has stated that autism is a good thing.  He bans anyone who disagrees with neurodiversity or levels any sort of criticism of him from his website, Wrongplanet.net.  Even worse, when one of the members of Wrongplanet, William Freund, threatened to murder people, Plank did not report this to the authorities.  Freund carried out his threat and murdered two innocent people before committing suicide.  Another member of wrongplanet, Hans Petersen, murdered his dermatologist.  Even though the relatives of the people Freund killed sued Plank, another member of wrongplanet threatened to go out and murder people with a gun and Plank did not delete the post and this person remains a member of WP in good standing.  When I emailed Plank asking him to report this person to the authorities, my query was unanswered.  I contacted the FBI and only then did Wrong Planet delete this person's post.

As you can see from the above screenshot photo, they're having their 2016 annual conference in New Orleans this summer and their keynote speaker is none other than the great Steve Silberman.  The individual who stated that an autistic brain compared to a non-autistic brain was no more broken or different than a computer that had linux as its operating system rather than Windows.  The man who stated that disability is part of the human experience and that we all became diaper wearers, so it was no big deal that some severely autistic children are incontinent.

Silberman is to be accompanied by a panel of autistic people for a discussion accompanied by his keynote speech.  I wonder what sort of autistics these people will be.  Will they be people like Landon Bryce who admit they are self-diagnosed yet say autism should not be cured and that people who support autism speaks and a cure are eugenicists?  Will they be people like Nick Walker who states the same thing but is completely functional and is able to work and get married and support a wife and a child?  Or will they be people like Roger Kulp, who's intelligence is intact and verbal, yet who have suffered tremendously from their autism and want to let the world know so that we can pursue treatments and maybe *gasp* even a cure?  My guess it will be more likely the former rather than the latter.

Apparently it is about the bottom line and almighty $$$$.  Silberman's book made the NY Times Bestseller list and he's still widely known in the autism world and they apparently want money in their organization rather than doing the right thing.

I believe an autism society should not support neurodiversity.  They should say  someday we hope we can have a cure and treatments for this disease and it will be a thing of the past.  Someday we hope there won't be a need for conferences like this.  That autism will no longer exist and defenseless children will no longer be crippled and sick.

I suggest people boycott the conference this year or boycott ASA until they get their act together and stop supporting neurodiversity.  Or, at the very least, walk out of the auditorium as Silberman and his merry band of mischief makers who claim to be autistic start giving their spiel.

I find the story of your attending ASA meetings in the early 90s very interesting.I see some parallels to my own online experiences in the last ten years,where I have been in a number of Yahoo,and later Facebook,groups.Groups made up exclusively of parents,where I have been the only person on the spectrum in the group.But I had been more than welcome,because of the complexity of my medical issues,the severity of my autism before treatment,and the fact I was looking for answers for the cause of it all.I had no idea that it would eventually lead to where I would eventually be diagnosed with a unique variant of one of the rarest neuroimmune diseases in the world.

Of course the various immune,metabolic,and chromosomal disorders that have autism as a feature,is something Silberman and his ilk have proven time and time again,is something they know nothing about,or have any desire to learn about.

I don't want to take the time to wade through a lot of articles and blog posts,but did ASA endorse Ne'eman for the NCD while Rimland was still alive and on the board?I've forgotten.I have read a couple of stinging rebuttals online to the claim Bernard Rimland may have been the father of neurodiversity.

As for the threats by people on Wrong Planet,it just further demonstrates that high functioning autism,and serious mental illness often go together.Something I know all too well,from members of my own family,and something well documented in the scientific literature.John Elder Robison is one of the few I have heard in the neurodiversity movement admit as much.


One wonders if there will be any parents of severely disabled children to protest Mr. Silberman's appearance.I suppose not.Many have been brainwashed into believing their very sick or intellectually disabled children will magically turn into another Ari Ne'eman or Nick Walker one day.

@ Roger If I remember correctly, Bernard Rimland died around 2006. Ari Ne'eman's appointment to the NCD came up around 2009, so I'm pretty sure Rimland was deceased by the time Ne'eman's appointment came up. I don't recall if Rimland ever took any sort of stance, either pro or con, on neurodiversity. I'm pretty sure he died around the time or just before ASAN started and well before the ransom notes thing when Ne'eman started to become well-known and get media attention. It's quite possible he's turning over in his grave now.

I do not know if this extension of the world of autism into power politics is of any use to those who suffer it.
We have here two kinds of denials. On the one hand those that insist in cures when any look at the evidence would suggest that such cures do not exist and are´nt going to exist in the next hundred years. On the other those that idealize autism beyond what would be a psychological transitory reaction to mourning on the parents part. Neither the enormous loads and challenges which we suffer, nor the fact that some phenotypes A seem characterized but lack of reciprocity, unmanageable egocentricity and lack of ability for synthesis or contexts seem to matter to the neurodivergent.
I rather think that ir will be better to recognize the suffering and sense of reponsability of those that are pro-cure and the merits of fighting for fundamental rigths by the neurodivengent. Whislt this is not done, thousands and thousnds of disable chiuldren and adults are subjeted to criminal medical treatments and to demeaning dog-worthy behavioural therapies.

Why did you lie to me? You told me that you didn't want to question the Autism of anybody who calls themself Autistic (although, you were critical of self-diagnosis and late diagnosis). Why do all of your writings seem to prove otherwise?

It's because you're delusional Ray. I never said that. I've certainly questioned John Elder Robison's autism since he's stated that he's not a disabled person. I've questioned the alleged autism of others too, even though his case is the most blatant. Like many ND's you're very confused and likely suffer from mental health issues that cause you to come to absolutely erroneus conclusions.