Is neurodversity's success worth the cost? ASAN's latest 990 form

The neurodiversity movement has wielded considerable influence in American autism policy and thinking, both in government and the private sector.  The Combating Autism Act was renamed the CARES act because ND proponents found the notion of combating autism offensive.  Several neurodiversity autistics have been appointed to government posts.  To the best of my knowledge, zero pro-cure, pro-treatment autistics have been appointed to these positions.

Likewise, after the Los Angeles Times published journalist Steve Silberman’s  scathing op-ed piece criticizing Autism Speaks, including the frequent complaint that no autistic persons had ever been on Autism Speaks’ board of directors, this changed and they added two autistic board members, both neurodiversity proponents who oppose curing and preventing autism.  One has stated that autism isn’t a disability but a strength.  The other said autism is a superpower.

Stephen Shore, one of these two individuals, told me he’d been approached by Autism Speaks before Silberman’s editorial, but turned them down, stating, he’d only come on board if the organization changed certain policies.  Not long after Silberman’s editorial, Autism Speaks also changed their mission statement which previously included goals of curing and preventing autism and the statement that autism is a global health crisis.  These three items were eliminated from their mission statement and Shore became one of the two autistic members of their board.

Spectrum, the newsletter of The Simons Foundation of Autism Research, routinely publishes articles by neurodiversity proponents such as Shannon Rosa, Julia Bascom, and Sara Luterman.  But nothing from your humble anti-neurodiversity blogger who has submitted to them on a number of occasions.

This was preceded about ten years ago by the ransom notes campaign, where a treatment center in New York advertised that autism was holding children hostage.  The Autistic Self Advocacy Network, one of the premier neurodiversity organizations, found this campaign offensive and crusaded against it.  This brought them national attention from a variety of major media outlets.  The bad publicity and chagrin caused the treatment center to discontinue its ransom notes advertisement.

Though male to female ratios are reported to be more than 6:1 in mildly autistic individuals, these activists who claim they’re autistic are predominantly female.  They now are trying to completely change the diagnostic definition of autism for females.  They’ve helped secure research grants to attempt to justify the need for this, by helping to gain funding for psychologist Allison Ratto as well as other researchers.  Julia Bascom, current CEO of ASAN, was one of the co-authors of a journal article by Dr. Ratto.  The two recently appeared on a C-Span show together.

However, it’s possible that this clout has come at a considerable financial cost.  ASAN’s 2016 990 form is now available.  In 2016, the Autistic Self Advocacy Network spent nearly a quarter of a million dollars more than the revenue they took in that year as shown here: 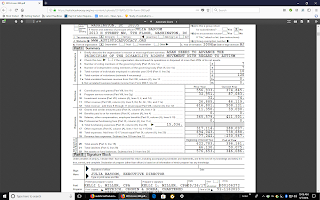 I’ve written previously about some of ASAN’s financial stuff, particularly about the exponential rise in CEO Ari Ne’eman’s salary which more than doubled in less than a four year period.  The pace was approximately double the increase of the organization’s revenue.  Ne’eman resigned as president of ASAN near the end of 2016 with Julia Bascom taking over.  In 2016 his salary was about $80,000.  Current CEO Julia Bascom apparently received an approximately $65,000 dollar salary for about two months of work.  Most autistics, myself included, have never even made a $30,000 annual salary.  Many are unable to work and are on SSI if they can get it.

In 2016, ASAN took in a little over half a million dollars.  So nearly thirty percent of their revenue went to pay the salaries of their two CEO’s.

Of course, there’s the caveat that this is data is a year and a half old.  This is the most recent data that’s publicly available.  It’s possible in 2017, the organization’s situation changed and they managed to take in far more revenue than in previous years.

Also, 2016 was a unique year for them in that their first executive officer left his position( though remaining on the board) and so it’s hard to tell how much work Ne’eman did and what Bascom’s contributions were in 2016.  We’ll have to wait until their 2017 990 form is available to see what their situation is under only one CEO.

If this situation continues though, how long will it be before ASAN is completely broke and they have to file for bankruptcy to evade creditors?  Gadfly wonders whether the success the neurodiversity movement has achieved is worth the profligate spending.

Though I concede I’m not an accountant or any sort of tax expert, on reading this statement there seems to be  no other conclusion an interested individual can come to than that the Autistic Self Advocacy Network as a 501© organization is nothing but a financial trainwreck.  At the end of 2016 they apparently had a few hundred thousand dollars in assets left, but if the current rate of spending continues, they should be deeply in debt in a year or two.

Perhaps there’s an explanation for all of this that I’m not understanding, but I can’t imagine what it could possibly be.

Writer, Twilah Hiari recently wrote an essay entitled Neurodiversity is Dead Now What?  While neurodiversity’s death may have been greatly exaggerated (paraphrasing Mark Twain), they do seem to be dying slowly.  The Autistic Self Advocacy Network may not be the only neurodiversity organization or persons who crusade for this misguided philosophy, but they are certainly one of the most influential if not the largest.

I’ve been trying to take down the neurodiversity movement for years in this piddling blog with no success.   But perhaps I don’t even need to do it.  It seems the way things are going, they are shooting themselves in the foot and might do themselves in with their own fiscal irresponsibility.
Posted by jonathan at 12:06 PM

Not to mention if you also go to WrongPlanet, you see that no new articles have been posted in almost a year. I think getting the word out on Wikipedia and WebMD really helped.

Well maybe it's just that Alex Plank is busy writing that book on dating for autistic men, even though I don't think he's had a girlfriend in like ten years.

I wonder if we anti neuro-diversity autistic persons could create a counter organization and maybe even sue ASAN for waste of money and over paid staff ect. I would love to start such a group. A quick many rant. I think mainstream "disability rights" organizations are BS this includes ASAN. These so called disabled rights groups are racist and hypergamist who love white girls with Down syndrome or whom are in wheelchairs. These hypocritical groups hate African and Native American descent males with any disability especially autism. Just look at anything from Disability Rights of California to the Special Olympics and tell me which demographics you see over represented in their leadership an publications, white females.

well, there would be no basis for a lawsuit. Starting an organization is no easy task, particularly since our side is lower functioning. Maintaining an organization like that is particularly difficult when you look at all the problems ASAN was having as of the end of 2016 with spending nearly a quarter of a million dollars more than they took in. I agree with your other statements.

What the hell is "hypergamist"?

If you're talking about someone who doesn't let you have sex with her, in many cases it's because she hasn't found *anyone* who she *does* want to have sex with. This is more common IRL than in media stereotypes (especially in high school and college, especially now that kids have to spend more hours on studying and overscheduled extracurriculars). This isn't hyper-gamist instead of mono-gamist, this is more like no-gamist.

The reason Neurodiversity seems to be undergoing a slow death is because neurodiversity no longer exists. It doesn't need to. Its now the prevailing opinion of science and organisation.There's no need for the neurodiversity movement. They've already won.